Find a Dealer Raven MTi2 In the past decade, the technological revolution has transformed audio into a medium that is produced and delivered in the digital domain. Powerful Digital Audio Workstations have transferred the entire recording studio into a virtual environment where all elements of the studio appear conveniently on a computer screen. But what has been lacking with the modern digital studio, is the same powerful workflow as what was accomplished on tactile mixing consoles. So back in , Slate Media Technology came up with a solution. 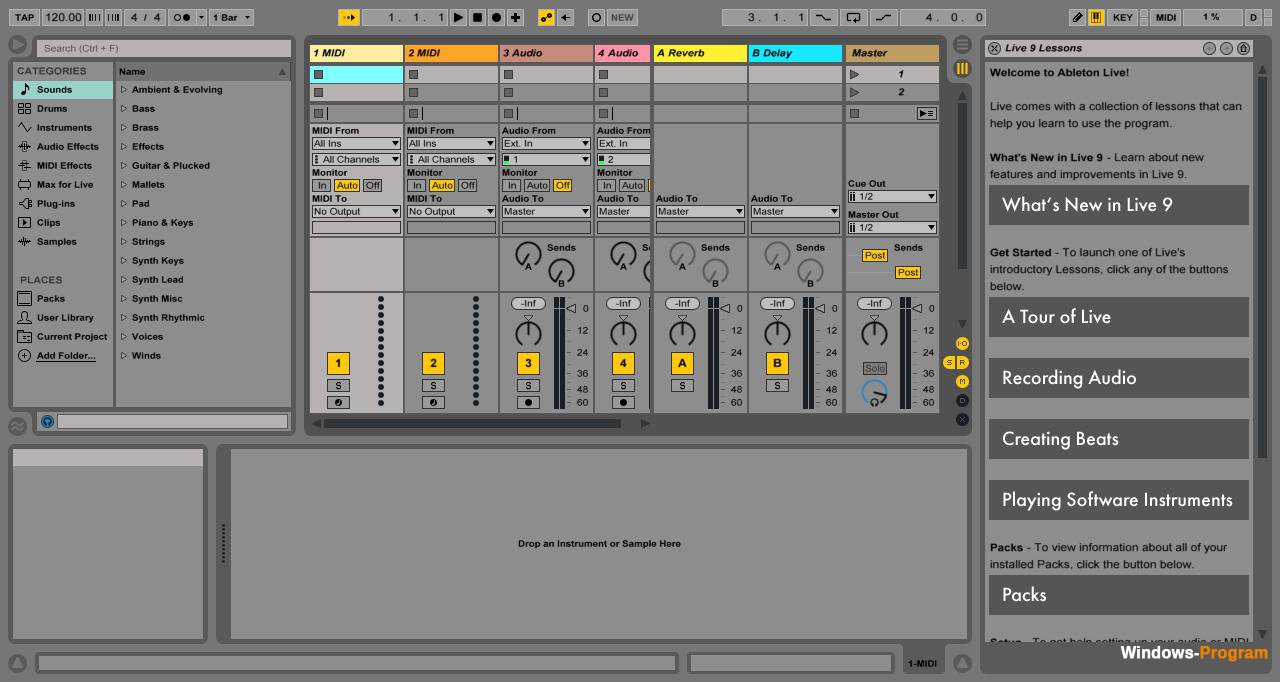 Download the latest version of Live 9 from your user account. Live could crash when loading a Set, if a Max for Live device was mapped to a macro control. After undoing a Macro mapping assignment for a Max for Live parameter, the parameter previous locked state would erroneously persist.

Adjusted the link in the pop-up dialog that appears when a user has reached their unlock limit. Fixed a crash that could occur when dragging older, uncolored tracks from the browser into an existing Set. Live could crash when restoring a Set that previously crashed. The Live GUI could become corrupted when instantiating certain third party devices. When activating Link during playback, the playhead would in some cases jump to the beginning of Live’s arrangement timeline.

Improved the reliability of vertical scrolling on Windows. Live Sets created on Windows will no longer be saved as temporary files, and will therefore show up under Windows Explorer’s list of recently used files. VST plug-ins would be rescanned on program launch, after an automatic update took place.

Previously, copying or duplicating an Arrangement clip created unwanted automation for some third-party AU plug-in parameters, if they were not yet automated. Changes for Push: Fixed a crash that would occur if the ReWire. This also fixed a bug which prevented waveforms or meters from being displayed on Push 2, under certain circumstances.

In order for the script to function correctly, it is recommended to update the Minilab MkII Firmware to the latest version available. The GUI would appear laggy when zooming in audio tracks and moving the zooming hotspot on Windows if the files were being streamed from a hard drive.

Fixed a bug that caused Live to crash when opening a context menu in a device chain containing no instruments. Fixed a bug which prevented changing the text color in Drum Rack return chains to white when the chain’s color was dark.

Fixed a graphical glitch that occurred when hovering over automation segments drawn on top of a waveform. The glitch was visible in Detail View in both the Arrangement and Session View , and would only appear in automation segments not covering the full track height. Disabled audio and MIDI meters were not correctly shown as grayed out in the routing choosers When Live’s authorization was not successful, the dialog box could erroneously confirm it as successful.

Fixed a bug which prevented auto updates from working on Windows Fixed a bug that caused Live to crash when moving tracks while Push 2 was connected, under certain circumstances.

When selecting a track containing a Simpler which was playing back a sample, the playhead would sometimes not be displayed. Live would crash if a Drum Rack clip in the last scene was duplicated from Push. When routing via Push 2, the display process might allocate an unusual amount of memory.

Live would crash at launch on OSX if the permissions for the system temporary folder were set to read only. Live would crash when performing ‘Undo’ after grouping chains in a Rack. Fixed a bug where the output of multiple audio tracks added to a Group Track via drag-and-drop would not be correctly set to the Group Track’s input. Fixed a bug which caused folded Group Tracks containing six or more tracks to unfold when moved, and Group Tracks containing five tracks to unfold when a sixth track was moved into them.

Link usage is now only possible with supported audio drivers. Launching playback in Live right after enabling Link would force all other apps to adjust their tempo. The 64 bit Live version would fail to recall VST parameters when loading certain. In addition to that, loading certain. A visual glitch would affect folded Group tracks in arrangement, under certain circumstances. Fixed a bug where unavailable routings were not grayed out.

Fixed a bug that prevented certain units e. Fixed an error in the software text for the Spanish language. Clip parameters on Push 2 were unresponsive after a Clip recording. Live could crash when duplicating a track containing Simpler instances, if Push 2 was in use. Frozen tracks no longer appear as a target when routing via Push 2. When there was no device in a track, Push would display a device from a different track, if that track was being played by another track or a Control Surface.

When creating a clip by adding a step from Push, the clip length was always two bars by default, until the Fixed Length value was changed once after loading a set.

Push would not initialize when recovering a Set after a crash. Choosing a scale on Push would pollute the Undo history. The monitoring state would not be displayed when the routing target was set to “No Input”, even if a signal was routed to this track’s input from a different track.

As a consequence of the new Simpler features, Live Sets created with this version cannot be opened with previous versions anymore.

Updated manual, lessons and info text translations. Live would crash when canceling a freeze action, if this was performed on a previously frozen and flattened Clip. Live would crash at startup if the preferences were corrupted.

Fixed a crash that could occur when using the ‘x2’, ‘: Fixed a crash which might occur when creating a time selection on Group tracks in Arrangement View. When converting Simpler to Sampler, the Sample Start marker would be visually misplaced.

When dragging unwarped Clips over the section of a song where the tempo was automated from a low value to a higher one, Clips stored in the clipboard would appear after the dragged Clip. When resizing a Clip past its limit, the dragged edge would behave erratically when it was not on a grid position or when the grid was disabled with a modifier.

When resizing Live horizontally, the positioning of Max Device windows would not adjust correctly. When exporting audio from Looper, the resulting Clips would inherit the wrong color. Live might run into issues when writing files to disk on Windows, if the file path contained non standard unicode characters. Some audio clips from the Core Library would open in the wrong tempo.

The new Simpler Slicing modes are available on Push 1 and 2. It is now possible to adjust the Input and Output routing and the Monitoring state from Push 2. This works for both Push 1 and 2. When transport is active, a progress bar on the Push 2 display indicates the playback phase for each of the currently playing Clips. Added a visual feedback for the count-in on the Push 2 display.

The logic is reversed when focused on Session View. Session Record and Arrangement Record are now independent from each other. By default, Fixed Length now respects the Launch Quantization setting. This works with Push 1 and 2. Different sensitivities are in place for the Push 2 pad matrix, depending on the function of the pads in the current layout.

The intensity of the LEDs on in the lower display buttons has been dimmed for Push 2, to create more contrast against the currently selected track. Improved the performance when moving the Session Ring horizontally with Push.

Push 2 only. Flag markers for Simpler and Audio Clips are now properly outlined on the Push 2 display. The fade-in and fade-out visuals on Simpler are now represented differently from Loops on Push 2. The Push 2 firmware has been updated to 1. This version allows to automatically adjusts the LED white balance for units produced in the factory from November Also, this delivers a new pad algorithm that improves the sensitivity of Push pads when playing with wrist pressure.

It also contains a fix for cases where Push 2 buttons might double-trigger, and improves the stability of the MIDI data sent from the Push encoders. Push Bugfixes: When recording multiple clips at the same time, triggering one clip would cause also the other ones to stop recording.

Live would crash when enabling the Push 2 Control Surface script on some systems. As a result of the fix, some display functions of Push 2 still won’t work. Improved the error logging to find out more about this issue. The Push 2 display process would not start on Windows, if non-standard unicode characters were contained in the user profile name. When muting or unmuting a track while in Mix Mode with Push 2, the state color of the track’s meters would only update if its peak level changed.

When changing Layout, the Step Sequencer page would reset. The step sequencers might malfunction when odd time signatures were in use. When step-sequencing a Clip in Arrangement View, the playhead would not be shown on Push 2. When a Drum Rack or Instrument Rack was frozen, it was still possible to edit the Chain’s mix parameters. This button only appears if Link is enabled in the Preferences.

Download the latest version of Live 9 from your user account. Live could crash when loading a Set, if a Max for Live device was mapped to a macro control. After undoing a Macro mapping assignment for a Max for Live parameter, the parameter previous locked state would erroneously persist. Adjusted the link in the pop-up dialog that appears when a user has reached their unlock limit. Fixed a crash that could occur when dragging older, uncolored tracks from the browser into an existing Set. Live could crash when restoring a Set that previously crashed.