Esko Software Studio Visualizer Why work in a flat world if packaging isn’t? Studio is a unique set of tools for 3D packaging design made specifically for packaging artwork professionals. 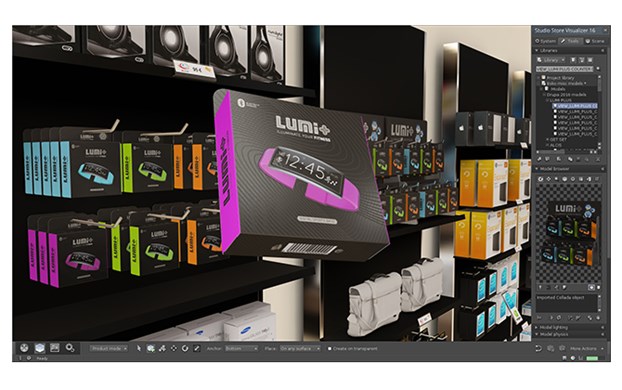 Click on images to zoom and use the arrows to view as slides. This muesli carton was destined for the re-cycle bin when it occurred to me that it would be a good subject for an exercise using the Esko Studio Toolkit for Boxes in Illustrator CS5. I did a quick scan of the flat pack, built up an Artios CAD cutter profile and made a fold-up of the box. From there on it was a fairly straight forward artworking job. Simply drop in the text, most of which I OCR’d from the original scan, add the logos and a barcode and then export the artwork pdf to Visualiser for the die cut, silver foil, lighting FX etc.

The final box images were exported from Esko Visualiser and assembled with the other elements in Photoshop CS5 – see below. It’s a shame that everything is scaled down for use on here – it doesn’t really do these images justice!

Old School Technique – This is how we used to have to do it! Flat production artwork mapped to 3D carton in Adobe Illustrator. Small amount of dodge and burn work applied in Photoshop. A long way round, but It was a solution! Although, I did find it remarkably irritating to be working as part of a Nexus Workflow team with no-one using the ESKO 3D packaging software, which was on the main server.

Seems that the IT department didn’t bother to install it, as they reckoned no-one had been trained in how to use it! Yeah – right! Well that should take a while to get a decent visual. Erm… actually – no! A few days back I discovered an old pre-production “concept” file for this toothpaste carton.

The finished image was uploaded here approximately 2 and a half hours later – and I was only playing around with this stuff. Now that’s how it should be done! This pack design was created by Mark Cavell at “the Spirit of…” studio in Leeds. I am simply using the original files to demonstrate how the CS5 artwork was translated to a 3 dimensional representation through using ESKO’s Studio Visualiser.

This sort of image is just scratching the surface of what can be done with this software, and the complete suite of pre-press solutions from ESKO is outstanding. The trouble is there are a great many “repro houses” out there that have all this stuff, but either don’t know how to, or don’t want use it fully. Get with the program – you have the tools to do the job!

A genuine “Flying Pizza” You need a cheap and cheerful 2 colour pizza box visual? Well here ya go. A few seconds of fun from a small video knocked out of the Esko Visualiser in next to no time. I originally did this as a very nice HD video, but I forgot that it has to be converted to.

Still, I hope you can see that cool corrugated cardboard box effect! Now I just need to check see how good TypeStyler is at doing this sort of stuff. I’ve waited years and years for the upgrade, so now, at last they may have got it right – finally! Then simply specilfy the layers for substrate, foils, emboss and spot UV before exporting to Visualiser.

The ability to swap all of these materials, and the lighting, in Visualiser is way cool! If you work in packaging design and you’re not using this software then your life must be sheer hell! Now for some spray cans! Simplest of the lot, but real handy for all those cosmetics spray things that need visuals. Olive Oil Label – Demo File: Somebody once told me that I should get a real job – stacking shelves.

Well O. Here ya go – 30 identical Olive Oil bottles in 2 neat rows. How’s that for racking up images – it used to take ages, now it can be done in seconds. I even popped outside to have the bottles appear in a olive grove – yeah!

Chocolate Biscuit Wrapper Visual: Just another quick concept – demo file. It’s OK though, and I will have to make do for the purposes of this very quick demo file. Design, Art Direction and Original Artwork: Kev Whittell. Product Photography and Pre-Press Service: Bryan Neville I wish I had been using this Esko software when Kevin and I were originally kicking this packaging concept around.

Variation on a theme. Well, if some is good – then more must be better. Give it a whirl! Adobe Illustrator – Anatomy of pre-press artwork.

Go to start of metadata Context How to combine all pieces of a packaging project into one file, i. The multipart workflow that we want to advocate with the new Studio Toolkit keeps a clear distinction between structure and graphics. Procedure For a project with three components, you need four source files: Out of those source files, you can produce view files, such as 3D PDF’s, images, movies, 3D collada files for viewing etc. The workflow: You create the composition of all structures boxes, bags, etc in the Studio Toolkit no graphics. The result is one composition.