Mixed In Key: Blend Your Playlist like a Pro

Successful use of Mixed In Key without any prior musical knowledge. Our Mixed In Key DJ tutorials are created so that viewers everywhere can understand the program and make it part of their technique. Since the software helps users to identify musical signatures and beats per minute, you do not need any prior musical knowledge. Additionally, we are dedicated to providing top of the line customer service so that you never have to do it alone. 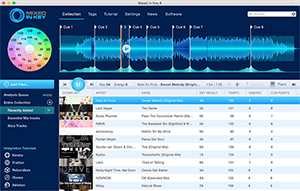 Analyze all. WAV files quickly and easily Create browsable collections, drag-and-drop supported Display harmonically-compatible song combinations Read our tutorial on harmonic mixing Save your last 10 song results into your collection Mixed In Key has low memory usage, so it should run alongside Ableton Live.

Many famous DJs currently use harmonic mixing to supplement their beatmatching technique. Although harmonic mixing seems complicated at first, it is actually very simple. Harmonic mixing is a process of mixing between harmonically compatible songs.

When you play the same song back-to-back, the mix will always sound pleasant because the key and the tempo are the same. When you play a Madonna vocal in D major on top of a Kylie Minogue vocal in B major, this could get a little sour. Madonna’s vocal is not in the same key as Kylie Minogue. Most people can often tell when something is out of tune, especially if it’s two singers. Imagine that Kylie and Madonna are recording together in the same studio. They perform a duet — Madonna sings in a low voice and Kylie sings in a high voice, but in the same key, perhaps D major.

Both artists sound great together. So why don’t duets like these work in a club, but succeed in the music studio? In Western music, there are only 24 possible keys. In the first instance, the two keys, D major and B major, do not mix harmonically. In the studio scenario the two vocals in the duet complement each other because they are in the same key.

By knowing the key of the song, you can mix it harmonically with other songs once you understand Camelot Notation. Camelot Notation tells you which keys will result in harmonic mixes. Using Mixed in Key, you can find the key of each song and translate it to the corresponding Camelot code.

With Madonna and Kylie studio duet in D major, the corresponding code would be 10B. But how do you know which mixes are harmonic? Let’s stay with our Madonna and Kylie studio duet in 10B. This key is harmonically compatible with the same key, 10B, the key above it, 11B, and the key below, 9B. Look at the chart like a watch and compare the keys to hours. Harmonically compatible mixes are only at the same hour, one hour ahead, and one hour behind.

If you changed the studio duet to match Kylie’s original B major vocal, it would become 1B. This would mix harmonically with 12B, 1B and 2B. Using this method does not require you to stay in the same key for the entire night. Movement around the Camelot circle can be done one step at a time. You can also move between the inner and outer circle, as long as you stay in the same digit or hour. For example, 2A and 2B are harmonically compatible. You can mix between 2A and 2B and start moving along the outer circle.

Your next mix can move back down to 2A, remain in 2B, or move to either 1B or 3B. This traversal of the circle makes every mix harmonic. Mixed In Key supports the Camelot Notation.

It can detect the exact key of every. MP3 and. WAV song. Writing these Camelot keys next to your CD sleeves or vinyl sleeves can tell you quickly which songs go well together. Please let me know if you have any questions. Take care,.

Not only does this talent relate to the timing of beats and the blending of bass, mid and treble, but it also relates to the tone or key of these tracks. Musically, certain keys work well with others and knowing which tracks compliment each other can make a DJ set even more pleasing to listen to. This tool analyses your tracks and labels them with a specific key, to figure out which tracks will harmonize with others you can use the Camelot Easy Mix Wheel. KeyFinder A new software has recently come to light however: This fantastic piece of software is the result of one computer studies engineer as part of his coursework. KeyFinder is free to download, but there is an option of making a donation to the producer of this software.

A free version of Mixed In Key is now available for download. Mixed In Key is a Windows application that finds the musical key of songs for. Welcome to the harmonic mixing community. key tracks themselves, or else allow professional musicians or software to do their Or subscribe for twelve months to our key update email service for only $, which includes a free database. In this tutorial Tadhg Leonard looks at how to mix and match the harmonic Firstly, there is a free key detection software called Rapid Evolution that can be.